Record number of events in Finland

World MS Day 2012 events are being organized in 25 localities around Finland – a record number of WMSD events in Finland so far!. This year volunteers give out postcards that feature people with MS and some basic information about MS. The postcards are linked to a nationwide campaign that introduces five people living with MS to a wider audience trough magazine ads, a tv spot and a campaign site. 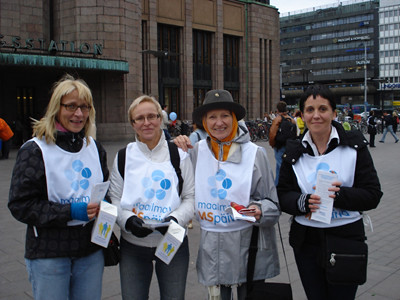 Over the past three years, WMSD has grown into being the higlight of the year for the whole MS community in Finland. Annually, more than 200 volunteers participate in raising awareness, with the Finnish MS Society offering a basic kit of materials to local societies and clubs.

In some cities, cords made of licorice are given to passers by. These cords are introduced as “myelin-licorice” and the basic mechanism of MS is explained on the label. Two-layered licorice cords are traditional Finnish candy sold in carnivals and fairs. Giving out myelin-licorice is an innovation by one local MS-club that has been replicated by many others.

17.06.19World MS Day 2019 was fantastic. We put MS in the spotlight and spoke loud and clear about the unseen impact of MS around the world. You made international news, organised incredible events and got social media buzzing about #MyInvisibleMS. Together we showed the world how engaged, international, and creative the global MS community can [...]
READ MORE

What I want you to know about MS

The ‘What I want you to know about MS’ graphic is an important feature of this year’s campaign toolkit.

We use cookies to ensure that we give you the best experience on our website. If you continue to use this site we will assume that you are happy with it.AcceptRead more