Across India, events and activities are taking place organised by the local MS society, MSSI, with three major cities with no current local MS society participating for the first time in WMSD 2012, Kanpur, Lucknow and Agra.

In the country’s largest city, Mumbai, there is a seminar and a panel discussion on ‘Living with MS’ with a panel of experts, followed by a prize-giving ceremony for people awarded one of the ‘MS Victor’ prizes and then the formation of a human chain to promote awareness. 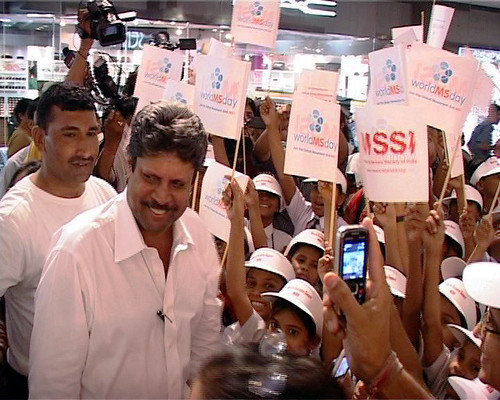 In the country’s second city, Delhi, a major TV channel, Doordarshan, featured a live interview with MSSI members. Today, there is a major interactive conference and high tea for people living with MS and their carers, with an evening event in a major shopping mall featuring enormous puppets as well as live music to raise awareness.  As in Mumbai, a human chain will also be formed to conclude the event, which will also be replicated in the cities of Kolkata, Kanpur, Pune and Lucknow.

There are also major events occurring right across the country in other big cities like Bengaluru, Chennai, Hyderabad, Indore and Agra.

A national medical institute, AIIMS, has also announced that it has sent a proposal to to the Indian Council of Medical Research (ICMR) to develop a national database of people living with MS to better understand MS from an Indian perspective and its incidence nationally. The most recent estimates by MSIF and the World Health Organisation, carried out between 2005 and 2007, predicted that there are 50,000 people with MS in the country.

17.06.19World MS Day 2019 was fantastic. We put MS in the spotlight and spoke loud and clear about the unseen impact of MS around the world. You made international news, organised incredible events and got social media buzzing about #MyInvisibleMS. Together we showed the world how engaged, international, and creative the global MS community can [...]
READ MORE

What I want you to know about MS

The ‘What I want you to know about MS’ graphic is an important feature of this year’s campaign toolkit.

We use cookies to ensure that we give you the best experience on our website. If you continue to use this site we will assume that you are happy with it.AcceptRead more